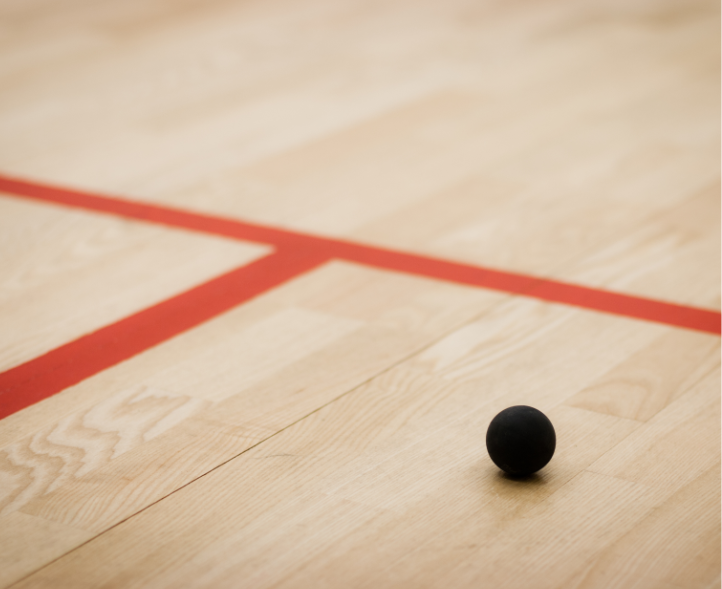 Hunts County entered the National Club Championships again this year and was pitted again strong teams from Lexden (Colchester) and East Anglia Squash Club (Norwich). The format for this was a group stage, with the top two teams progressing to the knockout stage of the competition.
HCSC vs Lexden

The first fixture was a home match against Lexden on Friday 17th January. It was a great night of squash and fantastic to see a great turnout of members coming down to watch the matches and show their support for the team!
Colin Griggs and Rob Dadds were first on court at strings four and one respectively. Rob came through his match comfortably in three games on court one against a potentially tricky opponent. Over on court two, Colin battled hard and lost out in extra points each game for Lexden to level up the tie.

Next up were super-sub Mike Bull and Chris Reeve. After a slow start in the first and his body recovering from the shock of being on a squash court, Bully was able to level the match up and make things interesting. The efforts from taking the second game showed in the third, which was fairly one-way traffic against the HCSC man, but then Mike found a second wind in the fourth game and once again took it to a tie-break. However, it proved one tie-break too many and he went down 3/1. Chris put in a strong performance against a skillful youngster and managed to lead throughout all of the games but was edged out at the end of each, losing 3/0.

Unfortunately, Lexden was the better team on the night and came out as 3/1 winners. There were some great matches on the show and it was an extremely tight affair. This left the team needing to win their match away at Norwich.

On Thursday 30th January the side traveled to East Anglia Squash Club last night for their final group stage match of the competition.

First on court was Colin at four against a tricky Ian Cox and Chris Reeve against Matt Bolt. Chris raced ahead in the first game and eventually took the game after winning one of many game balls. Meanwhile, Griggsy’s opponent was firing in some outrageous angles and unorthodox shots to take the first quickly. Unfortunately, despite adjusting and trying to get used to the difficult style of play, Griggsy lost out in tight second and third games. At this point, Chris had gone two games ahead after a well-fought second game.

Next up was Chris Shaw at two versus Jamie Goodrich. The first game was ridiculously high-paced, with Jamie equal to everything Chris was throwing at him and putting Norwich ahead. Over on the show court, Chris came very close to winning the third and taking the match in three, but Bolt had other ideas and managed to sneak the game in extra points to keep himself in it. It was a similar story again in the second and third for Chris, as he once again attacked well and moved Jamie around the court but relentless Norfolk man retrieved everything and closed out the match. The fourth game in the Reeve/Bolt match was another battle with both players going point for point but a crucial no let call gave Bolt the game and made it two-all.

The fifth was nip and tuck with both players getting ahead during the game. Chris managed to secure a match ball at 10/9 but Bolt leveled it. Both players had a handful of match balls before Bolt closed out the game and match 16/14. It was a fantastic match and a real battle; as illustrated by them still being on the court after both Griggs and Shaw played their matches on the other court!

With the tie lost, Rob went on the court against Tim Dixon to get some consolation points on the board. It was looking like one-way traffic in the first as Rob raced to a 9/0 lead and took the first 11/1 but Tim put in a spirited performance in the second and lead much of it before being pegged back. It was then a fairly straightforward third game and HCSC got their first win of the evening 3/0.

Despite the 3/1 loss on the night, there wasn’t much in it and on another day the match could have gone HCSC’s way. Thanks to East Anglia Squash Club for being superb hosts and for making it an enjoyable evening of squash. Footage of both Chris Reeve and Rob’s matches are being put up on YouTube; links will be posted on the Sports Academy Facebook page once they’re uploaded.

Unfortunately, this loss with the home loss to Lexden puts us out of the competition but we will be back again next year!