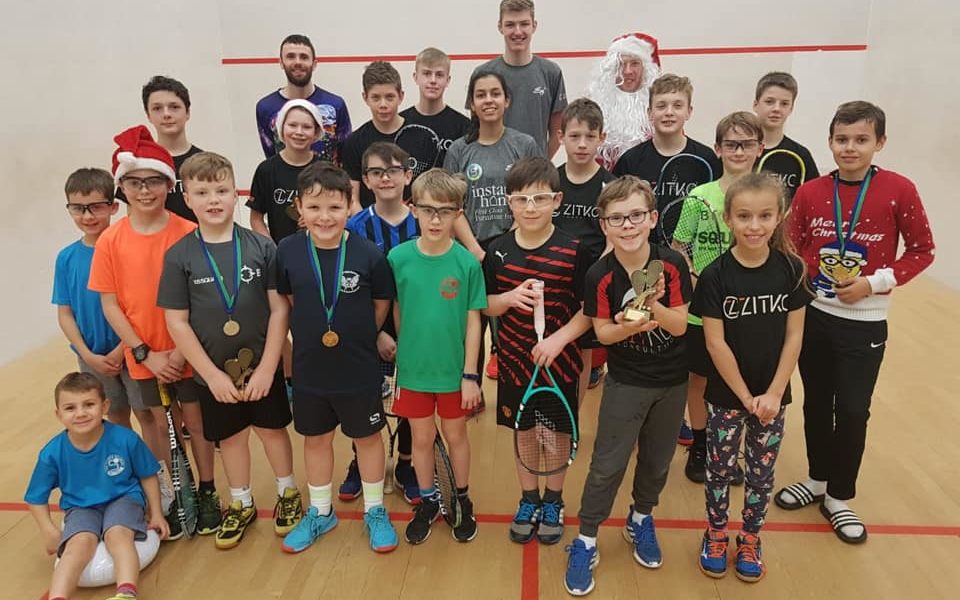 After many great matches over November and early December, the semis and finals of the 2019 Junior Club Championships took place on Saturday 14th December. There was a great turnout to watch the matches as it coincided with the end of year celebration and awards. Over the course of the afternoon there were some fantastic battles in the tournament matches, a great turn out for Team Santa vs Team Elves and some well earned treats when beating the coaches. Father ‘Chrismas’ also took time out of his busy schedule to take on some of the youngsters!

U11 Championships
The final of the Plate was a well contested match between Michella and Jonah, with Jonah taking the first game before Michella using her fantastic serves and length to take the next three and winning the plate.
Over in the main draw, top seed Josh took on Kieran in the final. After Kieran’s great performance in the semi-final it looked like he might cause another upset, racing a game ahead, but Josh started to relax and play some great squash to win the match and be crowned champion!

U15 Championships
The plate final was Tom vs Joe L; who was playing in his first competition having only recently taken up the sport! Joe battled hard and put in a good performance, but ultimately Tom had too much and took the plate title in convincing fashion.
We were treated to a brilliant battle in the morning in the semi-final of the main event. Bertie coming out on the right side of an epic five-setter with Aiden, securing a spot in the final against Diego.
There was some great squash played by both players and, despite a spirited comeback in the third game, Diego was too strong on the day and took the title with a 3/0 victory.

U19 Championships
The qualifying group for the U19s was very closely contested, with all three of the players beating each other and the spots being decided by games won! Oscar was unfortunate to be the one eliminated early having dropped one game in his win and not taking a game in his loss. Nathan and Will went through to the semis to take on top seed Sofia and second seed Ronnie respectively. Nathan played out of his skin against his more experienced opponent, even sending her on a couple of taxis, but Sofia progressed to the final comfortably. Despite a good performance from Will, Ronnie proved too and also progressed to the final. The first game was tight but Sofia ran away at the end and then, with her head up, put in a dominant display to take the title in straight games.

After the presentation of the Club Championship prises we moved onto the End of Season Awards. We’ve been blessed with another great year of junior squash in 2019 and it was nice to get the juniors together to celebrate their achievements together. There were three awards up for grabs; Most Improved Player, Zitko and Players’ Player awards.

Ziko Award
This award is giving to to a player who the coaches think displays all the qualities that make a player great to work with: great attitude, always gives 100% effort, takes feedback on board, show sportsmanship and get on well with all the other players. This year’s worthy recipient was Patrick, who is a fantastic asset to the sports academy and embodies all of the above. Well done Patrick; your fantastic attitude combined with the great development in your squash will take you far!

Players’ Player
This award is voted for by the other SA juniors and is a great one to win, as it shows how much other enjoy getting on court with the player that they nominate. This year the clear winner was Joe B, receiving votes from loads of his peers. For those that know Joe it wasn’t a massive surprise that he won as he is always full of energy, having fun on court, smiling and happy to get on court with anyone. Well done Joe; it’s always a pleasure to have you in sessions!

Thanks to everyone who took part in the Club Champs, the end of year celebrations and came down on Saturday. It was great to see so many people down enjoying their squash and getting involved with the celebrations. We hope everyone has a great break over Christmas and look forward to seeing everyone back on court in the new year!